I am using the an M1 iMac running the latest MacOS (fully patched) and the latest XCTU obviously under Rosetta as only an Intel image is available from Digi). The XBee3 network nodes are all running the latest Zigbee firmware. The network consists of a coordinator and 2 end nodes. One of the end nodes is set up with the image that I want to send to the other end node.

I am following the instructions in Xbee3 Firmware Over The Air (FOTA) update using XCTU - Wireless - Engineering and Component Solution Forum - TechForum │ Digi-Key and get to Step 4 to perform the actual OTA update.

The problem is that when I try to select the saved “.fs.ota” file, it is greyed out and I cannot select it to be sent to the target remote end node. 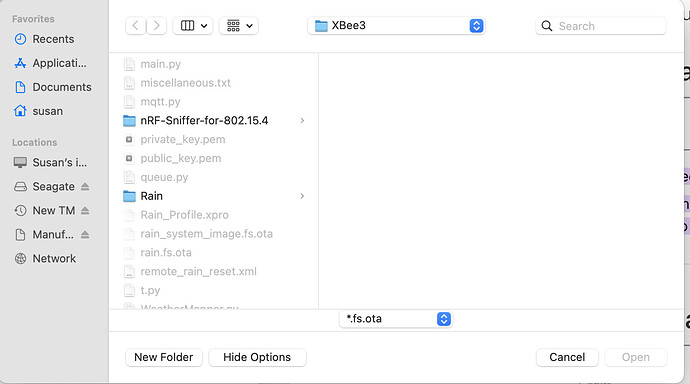 What can I do to progress beyond this step?

I would suggest looking at Digi XBee® 3 Zigbee® RF Module

Hello @mvut.
To be honest I am deeply disappointed by your response, almost to the point of being offended.
I have seen you paste that same (often inappropriate) text in a number of other topics where “OTA” is mentioned. I might have understood if you had pasted a link to the XCTU manual about this but what you linked to is totally unrelated to this issue.
This question is NOT about OTA itself, but rather about a possible BUG in the MacOS version of XCTU when running on an M1 (i.e. ARM) iMac.
Please either address the question being asked or leave it to someone who can.
Susan

I have made a few more experiments which seem to confirm my hypothesis tat there is a bug in the MacOS version of XCTU (possibly when running under the M1 Rosetta emulator).
I have the Windows 11 ARM version installed under Parallels on the iMac and I installed XCTU there. (I note that the Windows ARM version has its own Intel to ARM emulator that is used in this situation although the FTDI drivers are the ARM version)
Despite the multiple levels of emulation etc, the Windows XCTU does allow me to select the “.fs.ota” file and successfully perform the OTA upgrade of the remote node.
Susan

Yes, there is an issue with the Mac version that has already been reported. I sent you the link to the document as it is the Product Manual for the module and the latest firmware supported on it. If you look close, there are directions in the manual for performing OTA updates.

Hello Mvut,
I have looked carefully at the link you provided and I can’t see the detailed you mention.
HOWEVER, I can see them at Digi XBee® 3 Zigbee® RF Module (The displayed name is the same as yours but the link is different) which is a little further down the ‘Table of Contents’ on the left of the web page.
I hope others finding this link will be able to use the revised link
Susan